‘I HAVE THE MANCHESTER UNITED LOGO ON MY ENGAGEMENT RING’

With the new Premier League season starting August 14, we speak to passionate followers of the game, marketers and fans alike to understand just how deep rooted the PL craze is in India If you remember Dennis Bergkamp’s goal against Newcastle from 2002, Wayne Rooney’s ‘Bicycle kick’ goal of 2011 and Di Canio’s ‘Kung fu-like’ goal against Wimbledon from 1999; chances are that you are a die-hard Premier League fan like millions of other football enthusiasts in the country. From the national capital to the coastal lands of India, fan clubs from across the country are excited about the upcoming Premier League starting on 14th August 2021. The countdown has already begun, and calendars have been blocked. The Indian youth is showing its love for the power-packed sport in varied ways as part of these clubs which comprises students to working professionals. This time around, we tried to connect with the fan clubs in the North, West, and Southern parts of India to find out how they celebrate the sport, what excites them about the Premier League and their favourite football moments. Perhaps the oldest MU club in the country is in the capital, the Manchester United Fans Club Delhi. While sharing its journey, a marketing professional, Paras Sharma of MUFCD says, “It was formed in 2006. Just to test the waters, we decided to have a screening where only four to five people turned up. We were sure that this would only grow. Gradually the numbers started to shoot up, and from 2014 onwards, we have had 300+ fans watching the match together at a place called Route 04 in the heart of Delhi.” Talking about how they have record number of members in the fan club today he adds, “Our biggest screening had 900 people, and we filled three pubs that day. MUFCD has a mixed set of members including students aged between 16 to 24 years, and working professionals aged between 25 to 30 years, coming from diverse backgrounds like marketing, CA, HR, and some entrepreneurs as well. All these collectively form a group of 12,000 members that includes social media followers as well.” Down south in Kerala, football is more dear a sport than cricket. So much so, that many football legends like Diego Maradona have made a pit stop at Kerala to greet their large fan base there. The Premier League mania also has reached a crescendo there. Akash Keshvan of Manchester United Supporters Club Kerala (MUSCK) says, “We have close to 150 official members in the club. In 2011 it started with a Facebook group named Red Devils Kerala. We used to organize screenings in different cities back then and such was the craze that some fans even travelled around 200 kms to be a part of it. Finally, in 2014 MUSCK was born as an official fan club.” MUSCK members include students, government employees, corporate professionals as well as doctors aged between 25 to 40 years. 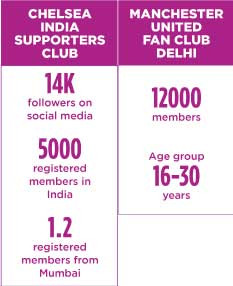 Another competitor club Chelsea India Supporters Club has more than 14K followers across the country. Vinit Khararkar, Secretary of CISC– Mumbai says, “On our social media handles, there are approximately 14k members as of now. Also, we have 5,000 officially registered members from across India. While Mumbai counts for around 1.2k officially registered fans.” With an aim to support and celebrate their team, Chelsea Supporters Club – Mumbai organizes an event, Blue Arena, to collaborate with Chelsea fans across the country. In the year 2019, Kolkata turned into the hub and hosted Blue Arena with a footfall of around 800 individuals from all over India. Apart from that, Chelsea Fans Club organizes screenings, footy games and even PlayStation games, occasionally.
Football is nothing without fans, they say but for football fans, it’s the game and their choicest team that matters the most and our fanclubs here have gone to great extent to prove their loyalty towards their club. 26-year-old Edelbert Menzes, a Chelsea fan, from Mumbai Official Supporters Club, while flaunting his tattoo says, “I got the club’s initials inked along with the UCL trophy we won recently.”
MUFCD’s Paras Sharma wears an engagement ring with the Manchester United logo carved on it. This is not it. He tells us that the club has members who have their rooms painted in red and wardrobes stuffed with MU merchandise, including vintage as well as latest jerseys and flags that they wear as capes during the screening.
MUSCB’s Manoj LR shares his views, “I have done several crazy things as a MU fan, but the craziest one is yet to be done. I travel a lot and my dream drive will be from Bangalore to Old Trafford, Manchester. Even now I travel as a MU fan, and wherever I go, I try to spread the positivity through my club’s philosophies.” MUSCK’s Kesavan, who has his room painted in red reminiscent of the Red Devils says, “The craziest thing that people feel we do is not only losing our sleep over games but also not letting others in the house sleep peacefully.”
Along with keeping the spark for football alive in their hearts, these fan clubs have actively been organizing a variety of events where they intend to serve the society. Kesavan says that before the pandemic, their Fan Club had organized refugee camps for the people of Kerala when floods hit the state. Naveen Ullal, from MUSCB adds that they have organized Blood Donation Camps and Fund-Raising Campaigns in the past. The fanclub includes Directors of companies as well as college students, HR professionals, journalists, and doctors all of who are waiting for the pandemic to end soon so that they can come back with greater enthusiasm to enjoy the game. With a lot of buzz around the big event, fans across India have made all the preparations to virtually join their mates and watch the tussle with the same zeal and enthusiasm.