MAHESH AMBALIYA: THE NEXT GOAL IS A D&AD YELLOW Meet Mahesh Ambaliya, the young man whose photo was held up by members of Team Ogilvy India as they went up on the Cannes Lions stage to collect the Grand Prix for Creative Effectiveness for ITC’s Savlon Healthy Hands Chalk Sticks campaign this year. Last year, when the campaign won multiple awards at Cannes, Ogilvy big boss Piyush Pandey was quick to give credit where it was due by announcing that the much-acclaimed campaign was Ambaliya’s brainchild - rare in an industry where it is often hard to establish who really owns an idea. Ambaliya, who comes from Gujarat, was also a winner of IMPACT’s Top 30 Under 30 award earlier this year. He initially chose to pursue film-making before being discovered by Abhijit Avasthi, then National Creative Director at Ogilvy India. There was no looking back after that for Ambaliya.

Recently, however, he moved on from his role as Copy Supervisor with Ogilvy to take some time off for himself. Here, he tells us about his personal connect with the award-winning campaign, the big Cannes honour, his aspirations and more.

Q] Tell us the story of the Savlon Healthy Hands Chalk Sticks campaign idea. What inspired the campaign?
The idea came from one of my childhood memories when I used to accompany my cousin to school in my village at the age of three. I used to sit next to her and scribble on a slate with chalk all day. After using up way too many chalk packets, she took away my slate, and gave me a book and a pen. This made me unhappy because writing in a book with a pen wasn’t as much fun as chalk on a slate. It was the fun element that Savlon wanted to bring in for the launch of the ‘Swasth India Mission’ to address hygiene issues in schools. All the campaigns our team executed for this mission therefore had that fun factor in them, be it ‘Haath se baat’, ‘ID Guard’ or ‘Germy Bimarkar’. Many of these ideas are still being executed in schools across the country.

Q] Take us through the journey of the campaign. What were some of the challenges you faced?
It has been three years since this idea was conceived. The idea was in the making for an entire year before it went live. It took a while mostly because we wanted to get it right. Our main concern was safety, because kids tend to put chalk sticks in their mouth, and the ITC lab guys made sure the product passed all the stringent safety tests. We are very thankful to our client who was on-board from Day 1, with dedicated resources like the ITC lab to work for us.

Q] Any anecdotes that you can recount while working on the Savlon Healthy Hands Chalk Sticks campaign?
There are many moments, but the one that Ram (Ramakrishnan Hariharan) and I will remember the most happened in the studio. Afshan Hussain Shaikh, our director, invited us to see the final cut at the studio. She also invited one of her friends to get a first reaction from someone who was not involved in the project. After watching the idea, her friend was so moved that she had tears in her eyes and she hugged me.

Q] What does it mean for you to have your idea win a Creative Effectiveness Grand Prix, no less, at Cannes?
Well, I have heard people say ‘It is still sinking in’ and I always use to think ‘like what’? If you have won an award you have won it! What is there to sink in! But with a Grand Prix in Creative Effectiveness, I now understand what ‘sinking in’ means. My creative director also taught me to appreciate what it is like running in the same category as your competition. What was really big is that it has won against campaigns like ‘Snickers Hungerithm’ and ‘Pedigree – the child replacement program’ which I loved. It has also gone on to win against multiple Grand Prix winners from last year like ‘The Fearless Girl’ and ‘Meet Graham’, so yes I suppose this is still sinking in.

Q] Take us through the moment when you first heard the big news.
Well, my team had told me we have two shortlists in the Creative Effectiveness category. So I was there eating a late dinner in front of the TV, watching the live stream. My mom knew something was up, and so she asked about it and I told her about the awards. She always keeps asking if my name will be displayed on the screen and my answer always is ‘That’s not how it works, Mom’. But this time it was different. Harshad (Rajadhyaksha) and Kainaz (Karmakar) did something that I will never forget – they carried a picture of me on that stage. Gestures like these make us love them more every day.

Q] Not many can boast of achieving this great honour at such a young age. What is next for you?
Well, last year, we got home two Gold Lions, our next aim was to win the Grand Prix. Now that we have won that, the next goal is a D&AD Yellow. We won India’s first pencil for Innovative Product Design last year, but we missed out on a Yellow. So that’s next. 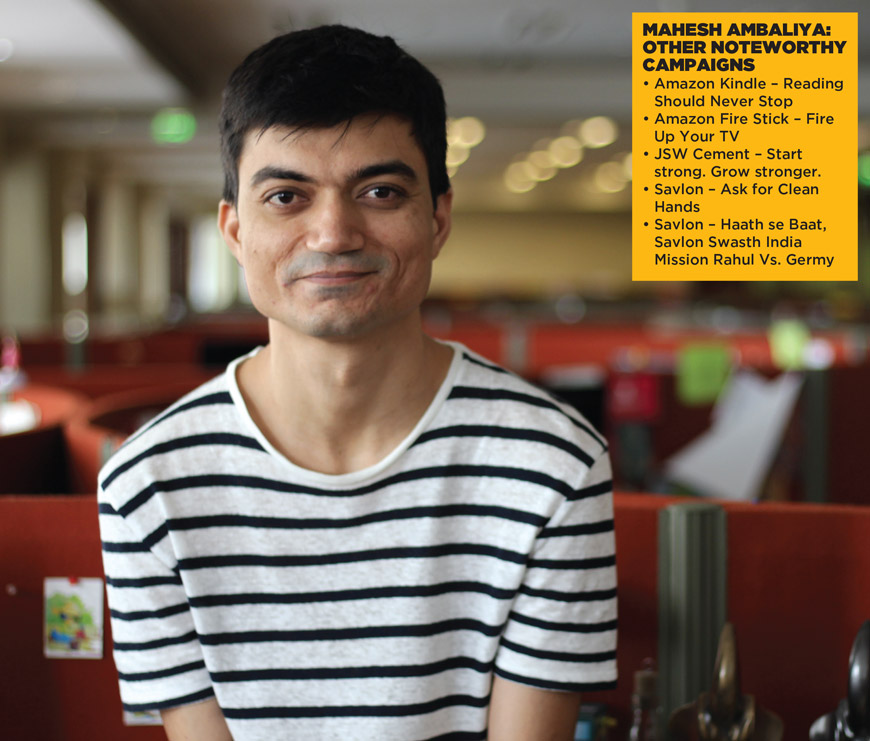 Q] Tell us a bit about what you’ve been doing after your illustrious stint with Ogilvy…
I’ve just returned from Bangladesh this month. I was there volunteering for the Rohingya Refugee Crisis at Camp 15 in Jamtoli. It was a new experience for me, and a heart-breaking one too. After returning home to Gujarat, I am working on treating my back pain and spine issues, for which I need to run and exercise every day.

Q] After studying journalism and film-making, what made you take up advertising?
In my school days, I was really inspired by the work Industrial Light & Magic did for Star Wars. It was my love for George Lucas that led me to pursue film-making. I have a degree in visual effects and films, but after school I was really uncertain of where visual effects was headed in Bollywood, so I joined the next best thing I loved – advertising. Maybe in the future, I might go back to films. All of us love advertising for the same reason, I think. It is a new day every day and we get to think of new ideas every day. And once in a while, we get an opportunity to change the world or make a small difference with those ideas.

Q] What advice would you give to young people who are just starting their career in advertising?
My bosses told me to keep watching great work online. If young creatives spend even a fraction of the time they spend on Netflix watching good work instead, it can really change their career. Most people generally watch good campaigns only after the Cannes festival. They watch what has already been judged and won, and this is an issue because you might not become a good judge of ideas yourself. Watch ideas before they have won and predict which ones will win. I believe this conditions your mind to produce similar, ground-breaking work.

Q] Who is the one person you look up to the most?
To just name one person would be really unfair to all the great people who have played a hand in making me whatever I am today. It started with Abhijit Avasthi hiring me at Portfolio Night, Harshad and Kainaz for taking me into their team even without any internship experience, and Ram for turning me from angry, young creative to a patient one. My team too has been truly patient with my stammering and has given me the confidence I have today. Outside of advertising, I look up to Dylan Moran and Seth McFarlane.