Sakal Media Group aligns agenda of driving social change closely to its business strategy, brings in change agents to aid move towards a better society, tell consumers about the transformation

Sakal Media Group aligns agenda of driving social change closely to its business strategy, brings in change agents to aid move towards a better society, tell consumers about the transformation

By SRABANA LAHIRI and SALONI DUTTA

As India moves towards smart cities and an evolved social fabric, the media has a big role to play in the process of change, by virtue of its great impact on the population. The Sakal Media Group in Maharashtra has aligned this agenda of driving social change closely to its business strategy, and brought about change agents in its ecosystem in an effort to help deliver and highlight this transformation. It all started when a young Pratap Pawar arrived in Pune from Baramati in 1968, with no contacts, connections or any legacy whatsoever, but only a yearning for social service. He took up the social cause in a big way and his mission continues today through the Sakal Media Group, helmed by his son Abhijit Pawar.

The Pawar family had bought the newspaper Sakal, founded by eminent journalist Dr NB Parulekar, in 1985. Sakal, born on January 1, 1932, coincided with Mahatma Gandhi’s mass civil disobedience movement and was linked to the social agenda right from the start. The Pawars turned it into a public limited company in 1989, with Pratap Pawar (now Chairman) becoming Managing Director. Over the years, the brand has grown, adding a lot of diversity into its Print, Television, Online and Events business. The company has grown with different editions across Maharashtra, and entered Goa, acquiring Gomantak and Gomantak Times. Abhijit Pawar is now Managing Director, and oversees the media business, including Saam TV and agricultural daily Agrowon, and all the group’s social arms - Sakal International Learning Centre (SILC), Sakal Social Foundation, Madhurangan, Tanishka, Delivering Change Foundation (DCF) – as well as the e-commerce portal sevenmantras.com.

‘NOT IN THE NUMBER GAME’

Sakal faces stiff competition in Maharashtra with other strong players like Lokmat and Divya Marathi in the reckoning. According to the latest IRS survey, Sakal stands at No. 2 in the pecking order of Marathi dailies in Maharashtra. The group is steadily increasing its marketshare and according to IRS data, the gap between Lokmat and Sakal has reduced from 90,000 copies in Jan-June 2014 to 50,000 copies in July-Dec of the same year. Sakal Media Group has a total readership of 43.07 lakh, with Sakal itself having 40.07 lakh readers followed by Agrowon and Gomantak with 2.15 lakh and 0.85 lakh readers respectively. According to the New Consumer Classification System (NCCS), Sakal has 66% readers in the NCCS A&B category. The newspaper has also observed a 15% growth of readers in rural Maharashtra, along with a 2.5% growth of readers in urban Maharashtra. In fact, with a year-on-year readership growth of 8.1% in the State, Sakal remains ahead of Maharashtra’s consolidated readership growth rate of 1.8% (which is for all newspapers in the State).

Though the numbers tell a success story in the making, Abhijit Pawar doesn’t believe in the measurement system and feels there is a need for a better way of measuring impact and response for content and ads. He says, “I don’t look at numbers. We are very passionate about what we believe in, and it’s as simple as that.”

Sakal has stewarded several social initiatives over the past several decades with many of the initiatives going beyond Sakal’s own regional markets, addressing needs across the country and now internationally too with projects in Malaysia, Germany, Israel, Mexico and the USA. Talking about increasing the group’s social footprint abroad, Abhijit Pawar says, “It’s a myth that the First World is fine and everything is hunky-dory there. If the First World doesn’t change, then the Third World won’t. We are expanding our foundation to see how we can help.”

Emphasizing on the Group’s agenda of social impact and social change, Pratap Pawar says, “We are working on transforming society for students, women, handicapped children, through the number of institutes that we run. We walk the talk.” The Group is also looking at using technology to steer transformation in the social and business spheres, with efforts to look ahead in time and envisage what a media company would be like in the next 10 years. On the mergers and acquisitions front, the Group’s aim is not to acquire something Print-centric, but anything that will help that particular target audience.

The basic philosophy of the Group to bring about social change is built on looking at what change society requires. “Politicians will come up with all sorts of concepts which might have been borrowed from the West. While people want to get the so-called comforts of the Western world, they also want to stick to our roots in some way,” explains Abhijit Pawar, adding that they are trying to understand the limitations of the government, bureaucracy and masses in general and fill in with their efforts wherever possible. “Sakal as a brand has a legacy attached to it and we follow the philosophy of ‘we don’t have to get into your home with a newspaper to make a difference’. The brand has a trust factor associated with it and that works towards getting people in on a cause. We don’t look at projects from a monetary perspective. If it adds to a social cause, it is just added benefit for us.”

BUSINESS WITH A CAUSE

To be future-ready, Abhijit Pawar says the Group’s products as well as people need to change and evolve. He says, “It is no longer the paper it was years ago. Some things will be relevant to Print and some won’t. The idea is, how can we actually use the whole goodwill that is there to come up with concepts that will solve problems? We have a tie-up with the Prime Minister’s office in Malaysia. He is someone who knows how to run the government and taking those learnings, we advise our government on what they should and can do and what they should not.” Education is a perfect example here, as there are serious gaps in the system. “We are trying to fill those gaps in the education system by collaborating and finding what will best serve our students to be better at what they do,” observes Abhijit Pawar, adding that they also endeavour to be sensitive to development, and to make sure that it eventually leads to economic growth.

PREPARING FOR THE FUTURE

Talking about the challenges that the Group might face, Pratap Pawar admits that there is fierce competition in the market. “In order to build business, people give concessions, incentives, which limit the speed of growth. But we are doing well. Our ad ratio is quite healthy and our social activities  connect with the people. That’s our plus point,” he states. Meanwhile, multimedia is the focus area for the future at Sakal, adds Abhijit Pawar: “The future of the group is in multimedia, so we can’t only do Print. The young generation will be the future readers. They would have access to all sorts of media, so we have to cater to that particular audience. Multimedia encompasses everything that one is looking at, and we need to integrate it with a social agenda.”

For both father and son, it’s not about circulation or revenue, the standard parameters of judging a business, but more about what they believe in. “We are not chasing profits or numbers. For me, it’s really how you take the business and make it into something which is truly socially responsible. It’s not very complicated, it’s not rocket science and we are just focusing on that,” sums up Abhijit Pawar.

‘The Pawar name can be an asset and a liability too...’

“My surname is both an asset and a liability,” says Abhijit Pawar. “I don’t realize it, but people may be looking at me as ‘Oh! You are a politician’s nephew!’ When I start talking about my social work, I realize that the other person is processing that as ‘Yeah right’ and conjuring up the image of a politician.” In school, he says he got the Best Student of the Year award and a scholarship. He was also the captain of the Maharashtra hockey team. But every time, he was labelled... and people said it was all because of a phone call from his uncle. “For me, it is a huge liability... It only has nuisance value,” rues Pawar. “The same goes for the Sakal name... When I launched Tanishka, it was very important for me to create a brand which stands on its own. I did not want to link it to the newspaper because I didn’t want people to take it as another gimmick to target women for newspaper circulation and ads. We don’t promote Tanishka like a Sakal baby. In Mexico, it is Tanishka Mexico. It goes as an independent brand.”

(Activities contributing to the betterment of society)

(Partners with governments and communities to deliver socio-economic change)

(A peer to peer platform for women to connect, share and champion the cause of socio-economic transformation across the globe. It has been expanded to Mexico)

Seven Mantras Focuses on shopping with a conscience 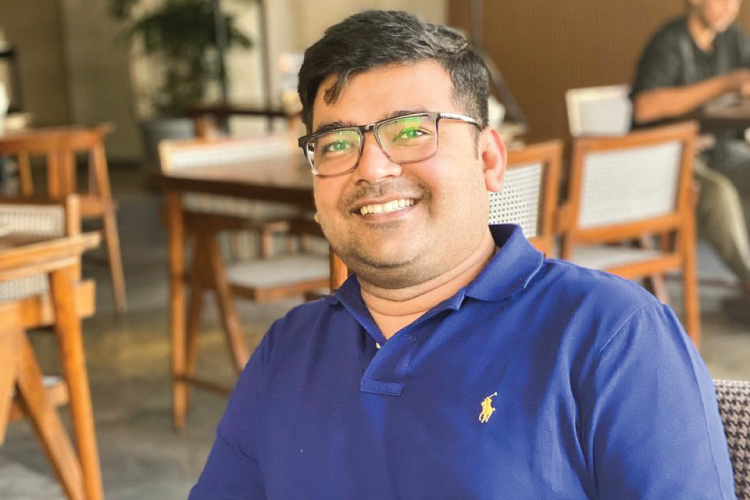 ‘SIGNIFICANTLY INVESTED IN BRANDING OVER THE PAST SIX MONTHS’ BEST PLAYERS IN THE GAME

‘DAIRY IS THE DNA OF OUR PRODUCTS’

‘WE HAVE AN AGGRESSIVE ROAD TO RECOVERY AHEAD’