Digital advertising inches closer to contributing to 1/3rd of the AdEx, registers a whopping 35% growth to reach Rs 21,353 crore in 2021 as per the Dentsu-e4m report The COVID-19 pandemic and the devastating second wave no doubt, wreaked havoc on businesses as well as the economy of the country, but it has also expedited the process of digitalization in the past 2 years. Digital advertising in India saw a massive transformation in terms of deeper user penetration, even in small towns and rural areas, and creation of new markets in 2021. Digital has now become the centre point to business operations and delivery. Moreover, the recent expansion of the digital user base has influenced the global digital advertising market like never before. As per the sixth edition of the annual report on digital advertising from the exchange4media Group and Dentsu titled ‘Digital Advertising in India 2022’, the Indian digital advertising industry leapfrogged by 35% to reach Rs 21,353 crore by the end of 2021 from Rs 15,782 crore in 2020. The report also revealed that digital media is expected to have a growth rate of 30% to reach a market size of Rs 27,759 crore by the end of 2022.

THE PANDEMIC PUSH FOR DIGITAL
The digital transformation, catalyzed by the pandemic, is helping the Indian advertising industry evolve. The sector, which currently stands at Rs 70,715 crore, is witnessing a growth of 18.6% over 2020. It is expected to reach 81,025 crore by the end of 2022, with a growth of 14.6%. Furthermore, it is expected to grow at a CAGR of 14.75% to reach Rs 93,119 crore by the end of 2023. This growth can also be attributed to the Indian Premier League (IPL), ICC T20 World Cup, Asia Cup 2021 and the upcoming assembly elections in five states. The pandemic has propelled the adoption of digital in India at an unprecedented rate of 35.3% over 2020. While traditional media has been growing by 12.6%, digital media has been leading the growth rally for the Indian advertising industry, growing at almost twice the rate of the overall industry. The digital advertising industry has witnessed a growth in market size from Rs 15,782 crore in 2020 to Rs. 21,353 crore in 2021, growing at 35.3%. As per the report, Digital media is expected to grow at 29.5% CAGR to reach a market size of Rs 35,809 crore by 2023. The growth of digital media can be attributed to factors like internet penetration, availability of affordable phones with internet connectivity, and change in consumer behaviour post COVID-19 outbreak. The internet user base has been increasing rapidly and has contributed to the growth of Digital.

TELEVISION – STILL LEADING IN MEDIA SPENDS
The report reveals that Television still contributes the largest share (42%, Rs 29,279 crore) to the Indian advertising market. This is followed by Digital ((30%, Rs 21,353 crore) and Print ((24%, Rs16,599 crore). Television accounts for a majority share of advertising spends in India, and it has been a leader in terms of media spends thanks to strong audience loyalty, the report points out. With the accelerated business transformation happening with digital at its core, it is expected that digital will have the highest spend share of 38%, catching up with television by the end of 2023. The report also adds that the spending share of traditional media will decline in the next few years and the share of spends on television is expected to come down to 38% by the end of 2023 from the current 41%. The spend share of print media is expected to decline from current 23% to 19% during this period. Commenting on the report, Divya Karani, South Asia Chief Executive Officer – Media, Dentsu says, “Dentsu typically looks at digitisation beyond the disruption to the many possibilities that this opportunity accords as well as harnessing the promise that digital holds for tomorrow with innovative and fresh thinking. We believe that digital inclusion is a basic human right. Therefore, we as practitioners, need to create change for the better by going beyond digital inclusion to ensure digital well-being. This ensures that digital truly realises its growth potential.”
Annurag Batra, Chairman and Editor in chief, Businessworld, Founder, exchange4media says, “When I think of Digital advertising and the Digital ecosystem, I am reminded of the fact that transformation can only take place immediately, the revolution is now and not tomorrow. The digital user base expansion along with self-service platforms is driving the global digital advertising market. Digital is creating new winners, new brands in ad businesses and is making current players who are slow at adopting uncomfortable, and that discomfort will hopefully lead to new opportunities.”

SPENDS ON DIGITAL AD FORMATS
According to the report, the highest proportion of spends on digital is contributed by social media (29% Rs 6,218 crore), closely followed by online video (28%, Rs 5,907 crore). Paid search is 23%, i.e., Rs 5,039 crore, while display banners claim 16% (Rs 3,420 crore). The rapid increase in mobile usage and improved internet infrastructure have led to 75% (Rs 16,015 crore) of digital media spends being dedicated to mobile devices. Most of the online expenditure on mobile devices goes to social media (30%) and online video (30%). Social media and online video remain the strongest platforms on digital media, seeing consistent growth over the years. With the newer offerings of social and video commerce, consumers are spending more time on these platforms, resulting in the high growth of advertising spends on digital media. With the rapid pace at which the internet infrastructure has been improving along with the advent of 5G technologies, spends on online video will witness the highest growth in the next few years. According to the report, the spends on online video is expected to grow with a CAGR of 34.86% to reach a spends share of 30% (Rs 10,474 crore) of the digital advertising market by the end of 2023. FILLIP FOR E-COMMERCE IN 2021
The report highlights that the pandemic has accelerated the growth of e-commerce industry in India and has revolutionized the way brands operate and grow their businesses. It has also changed the consumer’s choice to shop and pay. It also points out that more and more consumers have started shopping online after the pandemic and new consumers from Tier II and Tier III cities have been driving the incremental e-commerce growth. The e-commerce industry has emerged as the digital backbone of the retail sector. Many small and big players, especially from small metros and towns, have realized the immense potential that advertising on e-commerce platforms holds. By the end of 2021, advertising spends on e-commerce platforms were Rs 6,300 crore and is expected to grow at a rate of 36% in 2022. 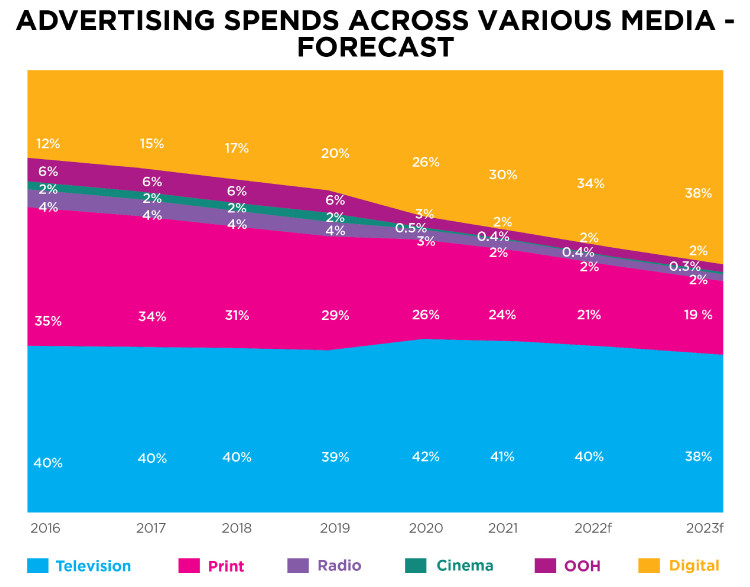